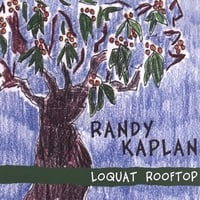 Randy Kaplan's debut kids' album, Five Cent Piece, was one of the coolest totally out-of-left-field things I've discovered since doing this blog. In essence, Randy is the Arlo Guthrie of children's music, and while the obvious comparison to Arlo Guthrie makes Randy's general approach a little less than unique, Randy always adds much of his own originality and personality and style and humor into that approach, and I can't imagine anyone else doing that kind of thing as well as Randy does for a kids audience. In fact, hearing Randy spin more of his hilarious yarns on his terrific new CD, Loquat Rooftop, I can't help but think that perhaps time is running backwards and the references should be the other way around... Maybe Arlo Guthrie should really be called "the Randy Kaplan of storytelling songs for adults". The spirit and humor and style of that approach is always designed to tickle the fancy of the kid inside us... it's just a question of the subject matter involved as to what the audience's age range will be.

Like its predecessor, Loquat Rooftop includes some originals and some covers. The covers include similar Tin Pan Alley and classic rock 'n' roll fare as the covers on Five Cent Piece (and one particular gem, the Randy-fied "Clothes Dryer"), but a significant thing about this new album is that the originals are the real standouts this time around. With Five Cent Piece, I liked Randy's originals, especially "Shampoo Me", but they were all, well, a little weird. Likably weird, but weird, nonetheless. There's still some real strangeness to the originals on Loquat Rooftop like "No Nothing" (featuring a monkey named Kxchc, who was raised by ducks) and "The Ladybug Without Spots" (who solves that problem by having watermelon seeds glued to her back), but there's an effusive charm that shines through each of them. The feeling of enjoyment is always first and foremost with these originals, as opposed to the Five Cent Piece originals, where I enjoyed them, but only in spite of them all being a little strange. And some of the new originals are more straightforward sounding and are quite beautiful, like the title track (the melody of which reminds me a lot of a song that I'm not sure I've ever heard before), "(Don't Say) Anything At All" (I love how he demonstrates what he's talking about with his little kid voices between the verses) and "Gotta Get Gone", the bluesy closing number.

A great thing about Randy is that he is not afraid to be downright silly with his voices and jokes when he knows that will serve the material and the intended audience. And by the intended audience, I don't just mean kids... adults eat up well-crafted goofiness, too (Monty Python, Steve Martin during his standup career, the Airplane!/Naked Gun movies, etc.). Certainly, this adult and his wife have laughed out loud many times while listening to this album. Some things like "The Sour Song" are kind of one-time laughs, as brilliant as they are, but other things are funny again and again, and Randy's eloquently witty wordplay and vocal phrasing is always a joy to listen to. He has a real knack for comedy and entertaining through his music, and I can't wait to hear what he'll come up with next.