You're the One & My Best Day

Stefan over at Zooglobble (without a doubt the most comprehensive source for kids' music coverage on the web) has begun a new series of guest posts with kids' music artists doing reviews of albums (kids' music or otherwise) that influenced them in some way. I've started off the series with a post about my favorite album of the last several years, Paul Simon's You're the One. Check it out here.

Also, I should mention that the purpose of this blog isn't to be a real source of kids' music news, especially as sites like Zooglobble and The Lovely Mrs. Davis Tells You What to Think are so much better about covering that kind of stuff. But I suppose I might mention when some of my favorite artists that I've already covered here have some significant news, or a new release that wasn't mentioned in my original feature. For example, Trout Fishing in America have a new live album out, called My Best Day. You can hear samples and purchase the album here.

Posted by Eric Herman at 9:03 AM No comments: 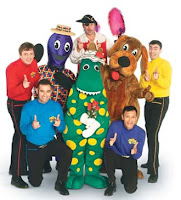 Yes, John Lithgow of stage, screen and TV screen is also a terrific children's music entertainer. He has released three kids' music albums; Farkle and Friends, Singin' in the Bathtub and the brand new The Sunny Side of the Street. I've heard and enjoyed some of Farkle and Friends but I'm most familiar with Singin' in the Bathtub, so I'll focus on that for this feature.

Singin' in the Bathtub is definitely one of my favorite albums of recent years, kids' music or otherwise. All but one of the songs on Bathtub are reworkings of older songs (Farkle includes more Lithgow originals), some of which were meant as kids' songs, and some which weren't but work well enough for that audience with Lithgow's performances.

The thing that seperates Lithgow's renditions from the many others who have covered some of the same material isn't so much the beautifully souped up big band and orchestral arrangements by Bill Elliott (though those are fantastic), but moreso the delivery of Lithgow. Often over-the-top in the best way, sometimes artfully reserved, and always entertaining to the kid inside me. Every now and again you'll run across an adult who seems to have a low tolerance for cartoonish voices, but a lot of kids love them. Lithgow's voice is definitely cartoonish at times on Bathtub, though always with character, which is probably an important distinction to make. His delivery of both the singing parts and animal sounds in "I Had a Rooster" is right up the alley of every giggle-prone preschool kid I've ever played for. He also has an effortlessly fun way with wordplay songs like "I'm a Gnu", "From the Indies to the Andies in His Undies" and "The Hippopotamus Song". His version of "Swingin' on a Star" may be my favorite of any I've heard, with extra points to Bill and the band for some hot playing on that one. Other highlights include the parody "You Gotta Have Skin", the amusingly twangy "Big Kids" (the one Lithgow original on Bathtub) and the gorgeous "Inchworm".

It's funny how my perception of John Lithgow changed so abruptly several years ago... I had seen him in a few films, usually either as the villain (Raising Cain, Cliffhanger) or as an offbeat crazy person (The Twilight Zone). I remember being thrown off by the initial promos for 3rd Rock from the Sun, featuring him in a zany comedy role. I thought, what an odd casting choice. But of course, once I started watching and loving the show, it was obvious that over-the-top zany comedy was right up his alley all along, and now my first thought of him is in terms of crazy comedy, and not as a crazy villain. There is no doubt that John Lithgow is one of the most talented and versatile entertainers of all time. He brings such a fun spirit to his children's albums, and it's a unique pleasure to be entertained by him through his music. I'm really looking forward to hearing his new album and enjoying what else he comes up with for kids (of all ages) in the future.

I haven't had a chance lately to add anything here, but my touring season is about to wind down somewhat for the fall and winter, so look for new posts coming soon including features on John Lithgow (yup, he does kids' music), Eddie Coker and Schoolhouse Rock, and an article about some of my experiences making decisions about what things are acceptable for inclusion in my original kids' music.
Posted by Eric Herman at 8:09 PM No comments: